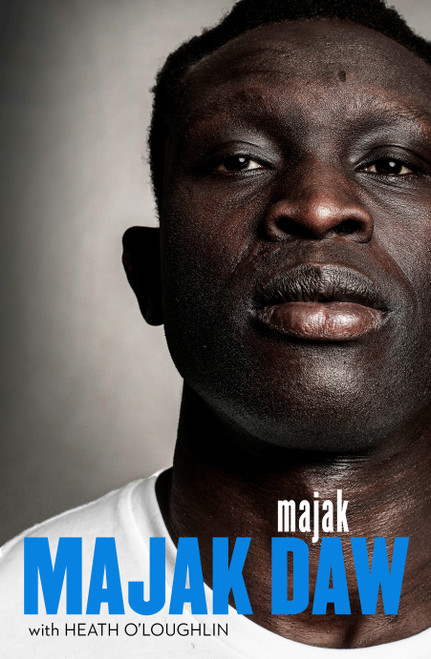 *Please note the first 50 signed copies have now been sold.

From AFL stardom to attempting to take his own life, Majak Daw’s is a football story like no other.

Born in Sudan, Majak Daw fled to Egypt with his family when he was only eight years old. When they were eventually able to make a new life for themselves in Melbourne’s south-west, Majak for the first time found where he belonged: playing footy.
Drafted as a raw prospect by North Melbourne, Majak’s explosiveness and athleticism were undeniable, and when his dream of playing in the AFL came true in 2013, he became a media sensation overnight. But on top of this unprecedented scrutiny, he was expected to be a role model for migrant youth and to speak for his entire community.
While from the outside Majak appeared to stand tall in the face of this pressure, as well as vicious racial vilification and crushingly bad luck with injuries, behind the scenes he was struggling. Depression, anxiety, alcohol abuse and the fear of becoming a father were tearing him apart from the inside. At his wit’s end, feeling like there was nowhere else to turn, Majak made the decision to end it all by jumping off the Bolte Bridge. But his story didn’t end there. Miraculously, he survived the 25-metre plunge into the icy Yarra River. Despite suffering horrific hip and pelvis injuries, Majak had been given a second chance at life, and he was determined to make the most of it. Embarking on a brutal rehabilitation program, he defied the odds and returned to play AFL footy, including a dazzling comeback game that many had thought impossible.

A true trailblazer, Majak Daw’s life is an inspiration to anyone who’s ever struggled to belong, felt oppressed or simply dared to dream big.